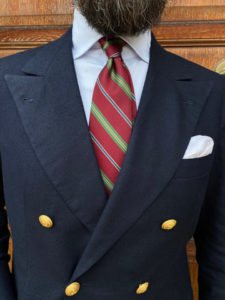 How old is the blazer?

Surely almost 200, because it was 1825 when the students of St. John’s College in Cambridge created the Lady Margaret Boat Club, which had its own “social uniform” represented by a red jacket.

But 1837 is also a historic date for the birth of the blazer, I would say the most famous. Yes, because in that year the frigate captain John Middleton Waugh received the prestigious visit of Queen Victoria on board his boat called HMS BLAZER. For the occasion the captain wanted to redo all the uniforms not to disfigure before the queen. Reading various theses we can say that those jackets were double-breasted with gold buttons and as a color was chosen navy blue for officers and striped white and blue for sailors.

So we can say that for both cases mentioned above the blazer has a common denominator, without which perhaps it would not even exist: water! The water needed for civilian club racing and the water that was used by military vessels to protect and expand their borders.

So there are two categories of blazers: the nautical one, navy blue with gold or silver buttons, and the sporty one in general, maybe striped or with badges on the breast pocket; but there is also a third, less sporty blazer; always blue, maybe night blue, but with black or dark blue buttons, to be matched with dark grey pants and brown or black shoes. In this case we are faced with a “formal” blazer, capable of being perfect even for business appointments.

And what tie do I wear when as a jacket I have chosen a blazer; here too it depends;

when the blazer is sporty, i.e. nautical club, then navy with gold buttons, all stripes or stripes with logos and emblems are allowed, including of course plain ties with association emblems;

On the other hand, when you wear a “formal” blazer with dark buttons and gray pants tending to anthracite and maybe white shirt, for me it is necessary to stay on a plain tie or with micro designs.