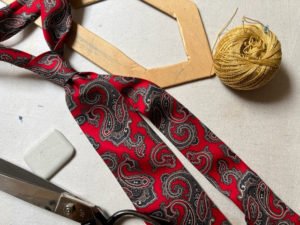 The paisley is one of the designs that have made the history of classic men’s clothing, including ties and scarves. To get to our days, it has crossed the centuries, starting from Mesopotamia and Persia; in fact, it first appeared there as a furnishing fabric and then became a clothing fabric in India, more precisely in the Kashmir region. And how did it arrive in the West? It arrived thanks to the British Empire and the East India Company.

At the beginning, in 1800, it was only imported from the British colony, but later Scotland became the production capital of the European continent; where? Right in a village called Paisley.

Obviously, Italy, with its silk capital, Como, did not stand by and watch; even in Italy the paisley pattern began to be printed on high quality silk for ties and scarves, but also for clothing. In fact, paisley became, in the early 1900s, one of the fabrics preferred by the famous dandy Gabriele D’Annunzio, so much so that he had a kimono made for his stay at the Vittoriale.

Its shape, inspired by plants, has remained virtually unchanged over time. And today we just wanted to show you the new paisley, strictly vintage, that Gianni has recently found. We hope you like them!